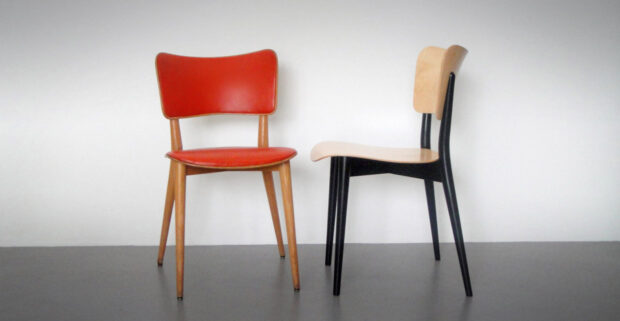 The Swiss artist and industrial designer Max Bill (1908-1994) designed among others in 1952 the cross frame chair and in 1955/1964 a bar stool (see pictures below). These were produced for decades by a Swiss furniture manufacturer.

After Max Bill’s death in 1994, his copyrights in his works were passed on to the Max, Binia and Jakob Bill Foundation. In 2001, the Max, Binia and Jakob Bill Foundation terminated the exclusive license to produce Max Bill’s furniture designs it had granted a Swiss furniture manufacturer. The former licensee kept manufacturing and selling the cross frame chair and bar stool designed by Max Bill, arguing that they did not enjoy copyright protection under Swiss law because they did not have the necessary individual character to be considered “works” in the sense of copyright law.

The Foundation sued for copyright infringement before the Commercial Court of St. Gallen and prevailed regarding the cross frame chair, but lost on the bar stool. The Commercial Court held that all elements of the bar stool were known at the time of its creation, that it did not create or significantly influence a style of furniture design (as the Supreme Court’s case law seemed to require for copyright protection of furniture designs) and if in doubt, copyright protection for works of applied art should be denied.

The lower court had erroneously applied a “tessellated” (or “mosaic”) approach to the assessment of individual character. It was irrelevant that all the elements of Max Bill’s stool – the round seat, the three legs, the angle of the legs – were known in the prior art (see picture below). Relevant was the overall impression of the design. The individual elements had never been combined in the way Max Bill combined them. The work was unique.

The design was also not determined exclusively by technical considerations. While each element served a technical purpose, the same purpose could be served by other forms (e.g., a square instead of  a round seat).

The Supreme Court then clarified its earlier statements that a furniture design needed to start or substantially influence a new style in order to enjoy copyright protection. This was not required as long as the design in question was more than a mere work of craftsmanship or industry and showed a degree of individual artistic design.

While the Supreme Court did not explicitly address whether for works of applied art the bar for individual character should be set higher than for other works – although it did reference the German Bundesgerichtshofs “Birthday Train” decision (I ZR 143/12) – it appears pretty clear that the Supreme Court now applies the same (low) standard for individual character to works of applied art as to other works.